I think it is time for a change in my focus, so this blog will not address our profession directly but rather corporate management. I believe that the concealment of criminal fraud by management is a critical emerging issue that should be top of mind for fraud auditors. Maybe it has always been an issue, but nobody wanted to discuss it.

A Google search on “concealment of criminal fraud” reveals that it is not limited to a single country or a single industry. And, it’s been going on probably since the early days of organized companies. Take a look at the depth of criminal fraud by management in recent times. It’s been perpetrated by the most senior management and often in situations where there was supposedly oversite. Surprised? Shocked?

So what is exactly is corporate crime and why should it matter to the fraud auditor? 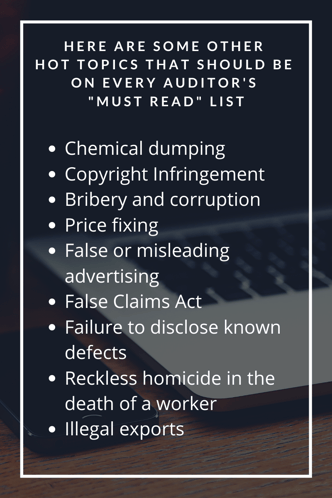 A corporate crime is the act of its personnel and need not be authorized or ratified by its officials. It is sufficient if the officials were exercising customary powers on behalf of the corporation. Source: USLegal.Com

Now, let’s take a look at Leonard’s list of corporate crime. These are some of the most popular fraud cases that we often hear about. I have intentionally selected companies from each decade. Why you ask? To illustrate, that corporate fraud is not a new phenomenon. I start with Equity Funding because it launched my fascination with how corporate fraud occurs.

ZZZZ Best is up next as sort of the first case to show how auditors could be tricked. Enron is here because the sheer size of the fraud. Wirecard reminds us that massive fraud is still occurring. One of my favorites, although not listed was Baring Bank, which collapsed in 1995 as a result of fraudulent investments by one of its employees working in Singapore.

As always, I encourage you to read about these corporate cases to open your eyes, learn, and enhance your professional skepticism.

Equity Funding Corporation of America was a Los Angeles-based U.S. financial conglomerate that marketed a package of mutual funds and life insurance to private individuals in the 1960s and 70s. By 1972, it was one of the largest and fastest-growing US life insurance companies In1973, ex-employee Ronald Secrist and securities analyst Ray Dirks blew the whistle on massive accounting fraud, including an entire computer system dedicated exclusively to creating and maintaining fictitious insurance policies. Investigation as many as 100 company employees had engaged in organized deception of investors, auditors, reinsurers, and regulatory authorities from 1964 onward.

The company filed for bankruptcy in the wake of the scandal. Top official Stanley Goldblum was sentenced to eight years in prison and fined $20,000. In all, 22 people involved pled guilty or were convicted.

ZZZZ Best was founded by Barry Minkow when he was still in high school. It appeared to be an immensely successful carpet cleaning and restoration business. There was just one problem; 90% of the customers simply did not exist. As it grew, ZZZZ Best became a front for a Ponzi scheme that collapsed in 1987. Investors and lenders lost $100 million.

The deception started early on as Minkow funded his growing business by check-kiting and running up fraudulent credit card charges. He later joined forces with Tom Padgett, an insurance claims adjuster. Minkow would claim that his company was doing work for Padgett. Together they formed Interstate Appraisal Services, which “verified” the work to Minkow’s bankers, which allowed him to take out loans. The schemes grew until he was outed in the Los Angeles Times for the fraudulent credit card charges. That led to a full revealing of the depth of his crimes.

Prior to the downfall, an independent CPA firm had been brought in to provide an opinion about whether the company’s financial statements were free of material misstatement. However, the CPA firm had been given false appraisal documents that were not provided by an independent third party. Furthermore, when the CPA firm requested a visit to a job site, Minkow and his associates rented a building and created a bogus site.

Minkow was eventually sentenced to 25 years in prison for fraud. After his release, he was convicted two more times for fraud and sentenced to five years each time. Source: Investopedia

Enron, an American energy, commodities, and services company, emerged in 1985 through the merger of two small regional companies. By 2000, it had 29,000 staff and had been named “America’s Most Innovative Company” for six consecutive years. At Enron's peak, its shares were worth $90.75. Jus prior to declaring bankruptcy on Dec. 2, 2001, however, they were trading at $0.26.1. The fated company's collapse affected thousands of employees and shook Wall Street to its core.

To this day, many wonder how such a powerful business, at the time one of the largest companies in the United States, disintegrated almost overnight. Also difficult to fathom is how its leadership managed to fool regulators for so long with fake holdings and off-the-books accounting. On a side note, the scandal caused the dissolution of the Arthur Andersen accounting firm, which had been Enron’s main auditor for years.

Wirecard, based in Germany, provided payment transaction services and risk management in the Internet age. It also issued and processed physical and virtual cards. Several months into the COVID 19 pandemic last year, the company announced that €1.9 billion in cash was missing. It owed another €3.2 billion. The company had been hounded by allegations of accounting malpractices since its early days, and in 2019, the Financial Times published a series of investigations including whistleblower complaints. Longtime CEO Markus Braun subsequently resigned and was later arrested. Former COO Jan Marsalek, who was fired, has disappeared and is on Interpol’s most-wanted list.

As you think about corporate fraud, I want you to ponder the following questions:

In my research many years ago, I identified a post from the Huffpost Business that indicated several considerations if you become involved in a corporate criminal investigation. These have guided my thought process ever since: